The city of Bergamo is a hidden gem in Italy’s Lombardian crown. Located betwixt Milan and Brescia, close to the Italian lakes, the winding streets of the Citta Alta provide the perfect location to enjoy a glass of the local Valcalepio wine. However, the undeniable charms of the city remain undiscovered by many foreign tourists. In contrast to its bustling metropolitan neighbour to the west, the city basks in this low profile.

Bergamo can be reached by train from Milan within the hour. Upon arrival visitors are immediately greeted by the vista of the enchanting medieval Citta Alta, which proudly overlooks the new city below. Viewed from the bottom, its steep slopes are a foreboding sight, but it is indoubtedly worth the gruelling detour between the train station and Atalanta’s Stadi Atleti Azzurri D’Italia.

Atalanta Bergamasca Calcio are currently enjoying perhaps the most successful period in their history. Having spent a large part of their 112 year existence bouncing between Serie A and B, their trophy cabinet houses a solitary, prized Coppa Italia won back in 1963. In many ways Atalanta are an archetypal provincial club, their distinguishing characteristic being a long-standing commitment and proficiency in the development of young talent.

The Stadi Atleti Azzurri is as basic a stadium as you’ll find in Europe’s top leagues. For the time being at least, it is a joyful relic from a bygone era. It’s low rise, graffitied exterior oozes character and an alluring sense of home. The refurbished Tribuna Centrale and the eastern Parterre are original, dating back to 1928, when the venue was inaugurated as a multi-sports venue, complete with running track, swimming pool and tennis courts. The expansive open curva at either end of the ground are original too, though of a later vintage. 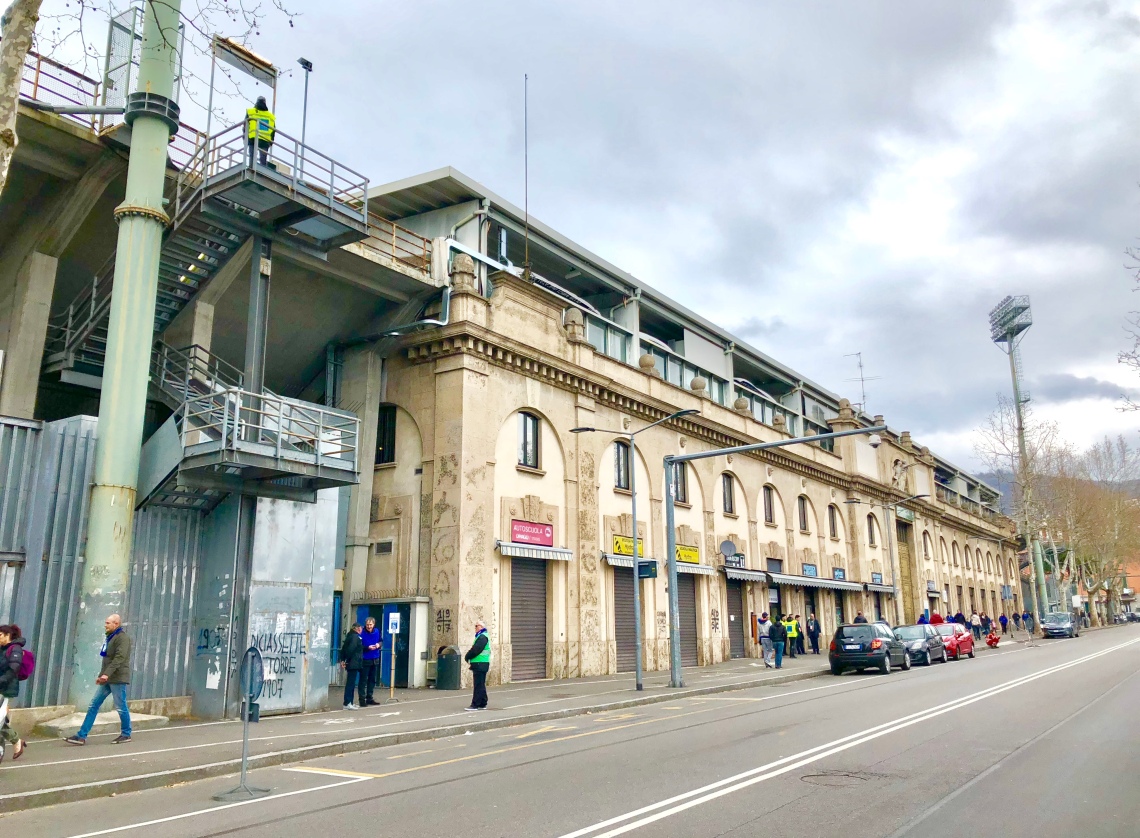 The rudimentary nature of the ground becomes increasingly apparent as you pass the obsolete ticket booths and tumble-down lavatories to enter the Curva Pisani. The lower part of the curva is constructed entirely of scaffolding, the exposed concrete structure of the upper curva is grey and weathered. The crumbling concrete terrace arcs from left to right, a curva in the truest sense, it’s sweeping lines only interrupted by a scattering of blue crush barriers. In stark contrast to the idyllic Citta Alta that overlooks the stadium, this edifice exudes a certain snarling beauty. It feels more like South America than western Europe.

Atalanta’s ultra groups have a reputation as being amongst the most passionate in Italy. Accentuated by their compact stadium, they are famed for creating some of the most impressive atmospheres and choreographies in Serie A. Traditionally, their ultras were of a left-leaning political bent and, although this has subsided in recent years, a faction of the old guard can still be found inhabiting the opposite end of the ground in the Curva Morosini.

The Curva Pisani began to fill up a good hour before kick-off, the greying concrete swiftly giving way to a sea of blue and black. Particularly striking was the diversity of the inhabitants – male, female, young and old. Small groups of ultras were working efficiently, scaling the perimeter fences to hoist up their banners. In deep contrast to the sanitised stadium experience in the UK, the curva projects a satisfying sense of lawlessness, where camaraderie and unwritten codes prevail. There was not a steward in sight, an ample supply of alcohol and espresso and zero regard for the hatched “no standing” areas.

As kick-off neared, the ultras took control of the central part of the curva, orchestrating chanting and unfurling a huge banner that shrouded a large part of the mob. The gesture was reciprocated by the Bergamaschi in the Curva Morosini. Amidst clouds of smoke from the obligatory pyrotechnics, the ground was rapidly transformed into a baying arena of war.

On paper this match against relegation-doomed Chievo looked like an opportunity to tighten their grip on Champions League qualification. However, the visitors shocked their hosts with a first half goal. Atalanta crafted numerous chances, but were unable to convert them. Despite this frustration the support emanating from the curva was unwavering in either tone or volume. The tifosi were there to drive their their team forward; nothing more, nothing less. Eventually their faith was repaid, as cult hero Josep Iličić made the break-through to level proceedings.

This is essentially an obituary for the old stadium, as the Curva Pisani was razed in May 2019 to make way for a modern successor. The good news is that the ground is being sympathetically overhauled, with many of the stadium’s historic features being retained and complemented. The redevelopment is happening one stand at a time, so there is still an opportunity in the coming season to experience a game on the southern Curva Morosini.

The modest capacity of the Stadi Atleti Azzurri, combined with Atalanta’s current success, means that securing tickets can be challenging. A ticket on the curva was priced just €20, purchased online from Ticketone.it about a week before the game. However, even for this game against lowly Chievo the curva eventually sold out. Obtaining tickets for bigger games is likely to be more problematic, particularly so in the coming season as the fans welcome one new curva and bid farewell to another.

The stadium has a lot to offer the football hoarder too. Outside the ground there was a free magazine-style programme, full colour and laced with advertisements. Upon entry to the stadium the ultras were distributing, by donation, a fanzine cataloguing recent displays at away games and forthcoming events. Under one of the nooks of the curva, ultras were doing a roaring trade in their unofficial stickers, badges and clothing. All at very reasonable prices and a much better bet than the official club shop in Citta Bassa.

If Bergamo is one of Italy’s hidden gems, the same must be said of Atalanta for Italian football. The intensity of the atmosphere in the Stadi Atleti Azzurri is capable of matching any of the larger teams or venues – something that will surely transcend the redevelopment of the stadium. With a low-cost airport on the doorstep and a beautiful old town to explore, this takes some beating for a football weekend.

Thanks for reading – if you’re heading to Milan as well, you might be interested in my articles on the San Siro and Inter’s former home, Arena Civica.