The port city of Salerno is immortalised in the photography of Andreas Gursky. He was on a family holiday in Campania in the early 1990s when he happened upon a beguiling panorama of the city. In a single frame, amidst the fading light, he captured both the delicate detail of the busy harbour in the foreground and the sweeping backdrop of the city and its enfolding hills. It broke all the perceived rules of photographic composition. In this moment of good fortune and intuition, Gursky created a new genre.

The port infrastructure has been the heartbeat of the city for centuries and made Salerno a strategic location during World War II. Along with the stretch of coastline to the south, it formed the entry point for Operation Avalanche, the Allied invasion of Italy in 1943. In the post-war years Salerno expanded rapidly, the population doubling to 160,000 in a period of just thirty years.

Today, Salerno lies in the centre of a triangular hotspot for tourism. Half an hour to the north, Pompeii can be found. To the west lies the glorious Amalfi coast, whilst the spectacular Greco-Roman ruins of Paestum are a short drive to the south. Yet few tourists will have ventured into Salerno itself.

War damage and the subsequent rapid expansion has a lot to answer for, of course. It’s certainly not Florence, but there are some treasures to be found. The 11th century Duomo lies at the heart of the old city, whilst the Castello di Arechi, the former seat of the Lombard Duke Arechi II, is perched high up on the hills overlooking the deep blue Gulf of Salerno.

Salernitana Calcio can trace their existence back to 1919, but they have been through a number of incarnations in the intervening years. Originally playing in blue and white stripes they adopted granata as their colour in the 1940s as a tribute to the Grande Torino team of that era.

Salernitana have spent the majority of their existence in Serie B and Serie C. The high point in recent history was a solitary Serie A campaign in 1998/99. That team featured an up-and-coming Gennaro Gattuso anchoring the midfield and a dangerous front pairing of Davide Di Michele and Marco Di Viao. Salernitana were declared bankrupt in 2005 and reformed under a consortium that included Lazio owner and president Claudio Lotito.

Salernitana previously played at the white-walled Stadio Donato Vestuti, situated near to the centre of Salerno. However, the team outgrew this quaint 12,000 capacity venue, which could not be expanded due to the proximity of surrounding residential buildings. The Vestuti still exists and is used variously for athletics, rugby and amateur football.

In 1990 Salernitana moved to their new home, Stadio Communale Arechi. Unlike contemporary new builds in Bari (Stadio San Nicola) and Torino (Stadio Delle Alpi) it was never intended to be an Italia ’90 venue, giving the architects a free hand to prioritise function over form. What resulted was a purpose-built football venue, happily devoid of running track, rectangular in shape and with few architectural embellishments.

The Arechi formed part of a broader programme of public works to modernise Salerno. The stadium’s location in a southern suburb was chosen for its practicality and ease of access. A light railway transports fans from the centre of Salerno, stopping adjacent to the stadium. Meanwhile, it was anticipated that expedient road links would increase the appeal of the team across the wider province.

The stadium is comprised of four discrete, double-tier concrete stands. All four are uncovered and the only protection from the elements comes from the overhang of the upper tier. The top tier is characterised by the same giddying gradient on all four sides. A climb to the top offers unrivalled views of those hills which first caught Gursky’s eye. It’s a highly symmetric design, save for the row of executive boxes and press accommodation housed along the top of the Tribuna on the western side of the stadium. 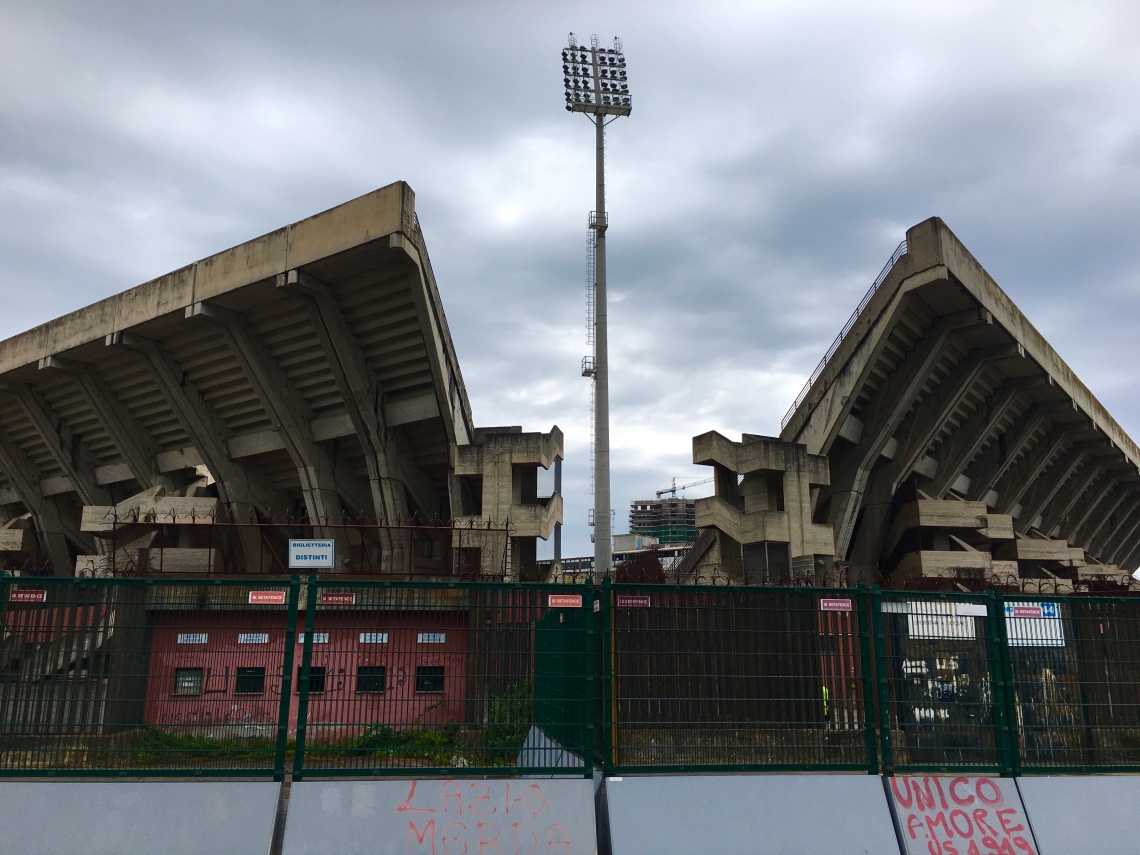 Stadio Arechi has hosted international football on a number of occasions and served as a home away from home for Fiorentina in the 1998 UEFA Cup. With the Artemio Franchi deemed unsuitable on safety grounds, La Viola used Arechi for their second round tie against Grasshoppers Zurich. Somewhat ironically, the match was abandoned after the fourth official was struck by a firecracker as he left the pitch at half time. This incident resulted in the expulsion of the Italians from the competition.

I visited Salerno for the end-of-season Serie B fixture against relegation-threatened Virtus Entella. It was a sparse crowd of just over 6,000, but the concentration of Granata tifosi on the Curva Sud generated an imposing atmosphere. Although it was not one of these occasions, the Curva Sud Siberiano have a reputation for producing some of the most impressive choreographies in Italy.

Obtaining match tickets is unlikely to be a problem unless you are visiting for a derby against Napoli or perhaps Avellino. Match tickets can be purchased from a wide range of outlets across the province (e.g. newsstands, travel agents), which are listed on ticketone.it. My transaction took place the day before the game in a small betting shop. It wasn’t entirely smooth, as a result of linguistic deficiencies on my part, but I eventually managed to hand over €12 for a Curva Sud ticket.

Upon entry to the stadium, you ascend a short flight of steps, from where access can be gained to the lower tier. Along this concourse you’ll find refreshment kiosks and ultra groups selling reasonably-priced merchandise. It is from this concourse that you can  access the upper tier via an aesthetically pleasing Brutalist-style stair case.

On the pitch, the Claudio Lotito influence was evident with the presence of several Lazio loan players. The most well-known of which was Joseph Minala. He courted controversy in 2014 when Lazio listed him on their website as being 17 years-old, despite an accompanying photo which suggested he might be considerably older. Reports emerging from his native Cameroon claimed he was actually 42. The team also featured Jean-Daniel Akpa-Akpro (brother of former Luton and Grimsby player, Jean-Louis) and Italian one-cap wonder Alessandro Rosina who starred for Torino in Serie A during the mid-2000s.

Salernitana were fairly dominant throughout the game, creating by far the better of the chances and ultimately ran out 1-0 winners. Things could have been different had Entella not spurned a guilt-edged chance early in the first half. The Granata made their dominance count in the second half, Riccardo Bacalon pounced from close range following a defensive error. Entella battled on in search of the goal that would rescue a valuable point, but in truth they always looked more likely to concede again than score themselves.

The day after the match, I ventured into Salerno to find the official club store on via Roma. This was a slightly disappointing affair; it was a small sports shop selling official Salernitana merchandise alongside a range of other Givova sporting products. Much more impressive was the Fan Shop di Nasti Guiseppe on via Torrione. This place sold an array of official shirts (Salernitana and others), books, mugs, keyrings and essential accoutrements for the ultra; pyro, flags and stickers. My wife had to come in and retrieve me from here.

One of the great advantages of Salerno is the fact that it’s slightly off the tourist trail. We found accommodation in an ivy-clad 15th century observation tower, with views over the Gulf of Salerno. For a family of four we were paying about €55 a night. The downside were the ‘professional’ women positioned along the main road into town, seemingly at all times of day. Undoubtedly, the city of Salerno is a little rough around the edges, but that’s part of the attraction in my view. At the very least Salerno provides a more sedentary escape from the claustrophobia of the Amalfi coast in high season.

Salernitana and the Stadio Arechi are well worth a visit if you are in the vicinity, particularly if you are able to coincide with one of the famed displays of the Curva Sud Siberiano. The more dedicated ground hopper might also take the opportunity to visit the old Stadio Donato Vestitu in town or the Salernitana training ground (Campo Vincenzo Volpe), which is located just a stone’s throw from the Arechi. 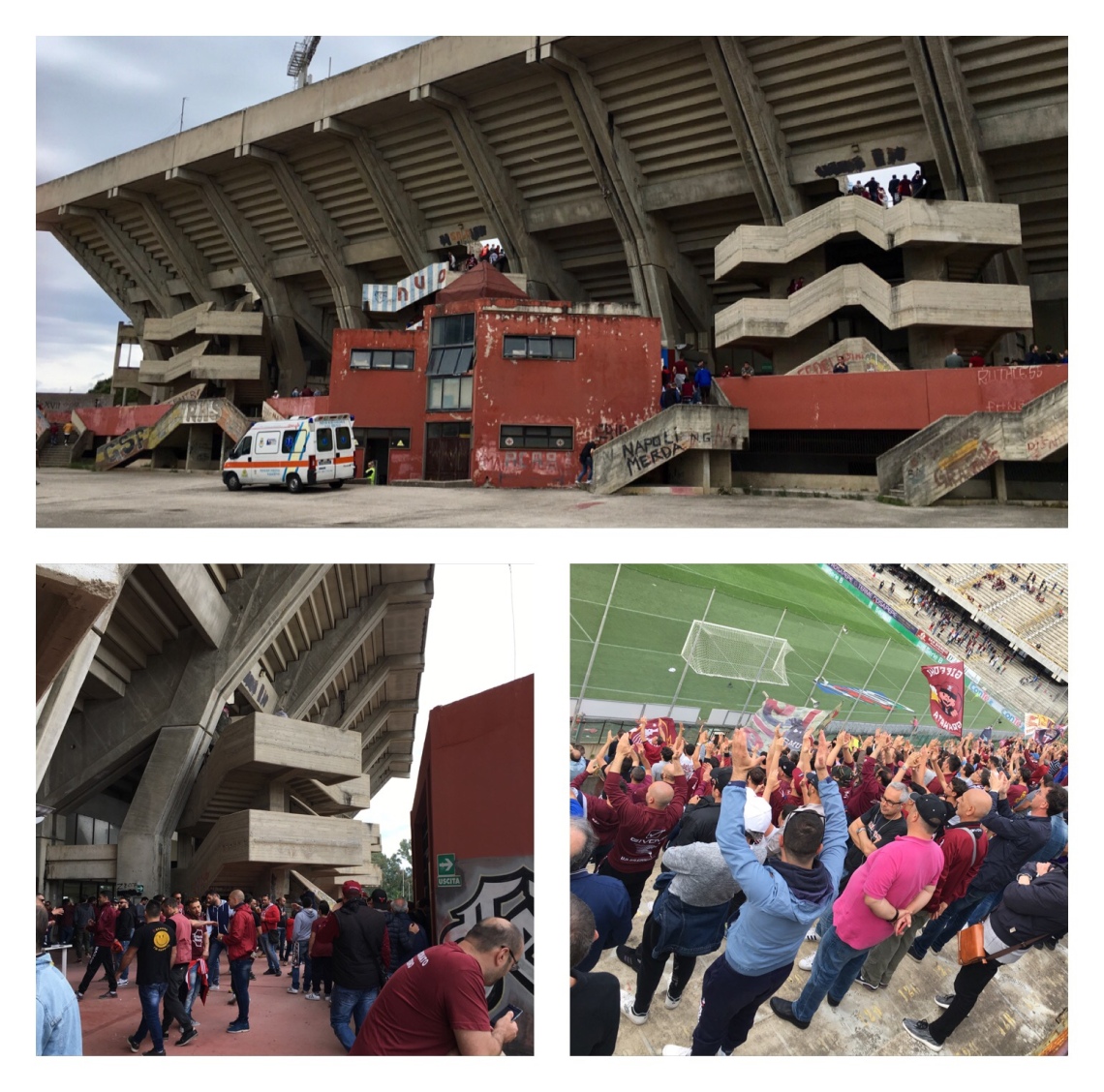