Twelve months ago, Parma Calcio sealed a fairy tale return to Serie A. This was the culmination of three consecutive promotions, after the club had been declared bankrupt in 2015 and suffered the humiliation of demotion to Serie D.

At the outset of the 2018/19 Serie A campaign, consolidation had been the primary objective for Parma. This was no case of false modesty, rather a reflection of the more limited means on which the former giants were now competing.

Head coach Roberto D’Aversa had the job of re-modelling his promotion-winning side. For the first time in a decade the club would begin a season without their talisman, Alessandro Lucarelli, who had bowed out in glorious fashion. Parma’s summer transfer policy was pragmatic and eclectic in equal measure.

Parma gambled on the experience of Bruno Alves (36, from Rangers) and Gervinho (31, from Hebei China). Meanwhile, other arrivals brought a depth of top-level experience otherwise absent from the squad; in came Massimo Gobbi (37, from Chievo) and Luca Rigoni (33, from Genoa). At the other end of the age spectrum, centre back Alessandro Bastoni (19, from Inter) proved to be an inspired loan signing.

Transfer fees were used sparingly; Juraj Kucka was brought back to the peninsula for £4.5m, whilst Parma paid a sizeable loan fee (£2.7m) to secure Roberto Inglese for the season. Inglese was one of five arrivals from the fringes of the Napoli first team. Parma also couldn’t resist bringing back Frenchman Jonathan Biabiany for an unprecedented fifth spell at the club.

Parma’s dealings in the transfer market paid off handsomely – and the objective of Serie A survival was achieved with a game to spare. Bruno Alves came as close as was humanly possible to filling Lucarelli’s boots. The season brought several memorable moments for Crociati tifosi too; Gervinho’s stunning solo goal against Cagliari deserves to be remembered in the same bracket as George Weah’s famous goal for Milan. Coming back from the dead to seal a 3-3 draw at Juventus in February is also one that will live long in the memory.

Despite achieving their mission, the type of football served up by Parma could not be described as progressive. It also resulted in a number of statistical aberrations which, far from detracting from their achievement, make it all the more remarkable. Here, we look at their season in five charts;

2. They took a no-nonsense attacking approach… 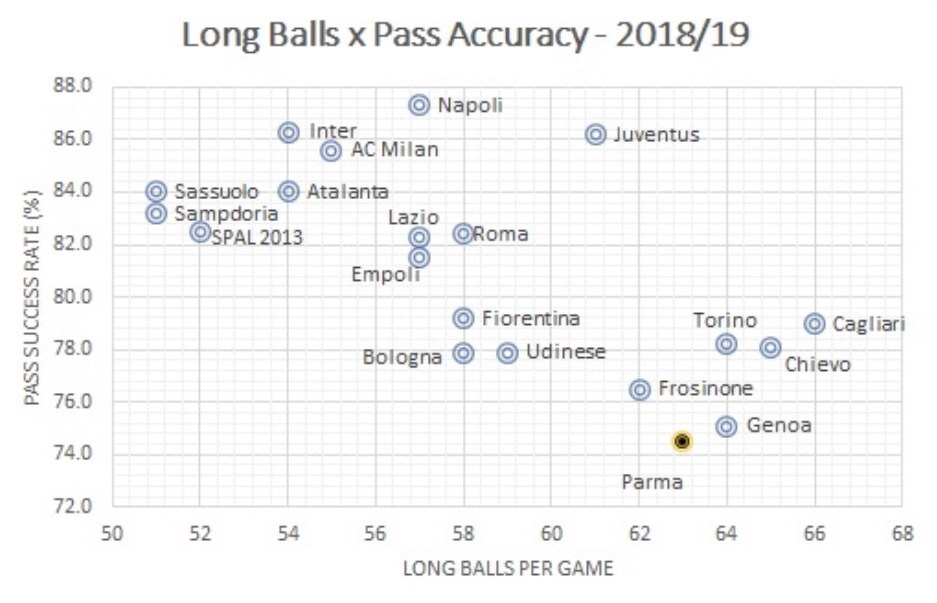 3. However, Parma were clinical in their rare attacks… 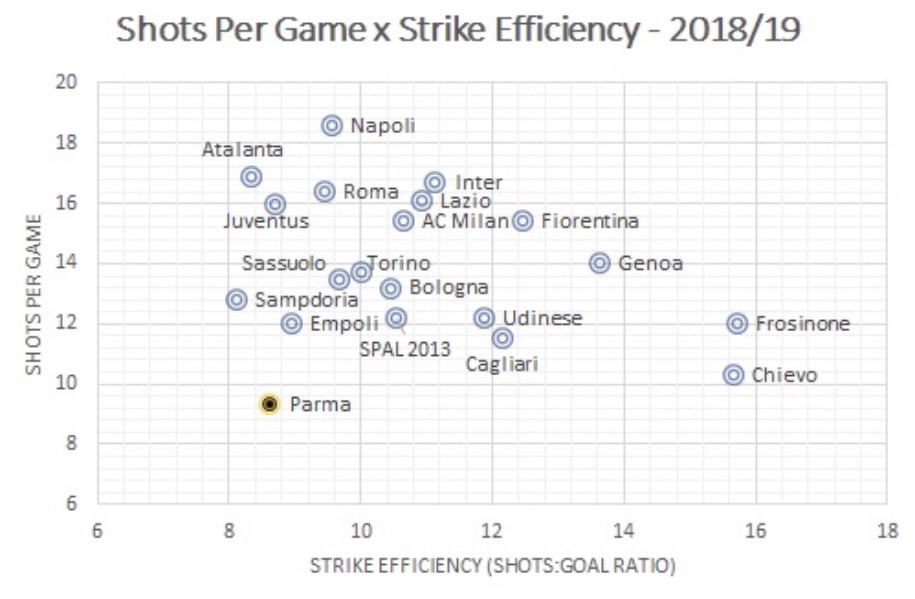 4. The re-birth of Gervinho was pivotal to their success…

5. At the other end of the pitch, Luigi Sepe was a busy man…

Thanks for reading! If you enjoyed this, why not check out my article on calcio’s gemellaggio phenomenon.

All data sourced from whoscored.com and legaseriea.it