In the final part of the series, we look at the rising stars and precocious talents that graced the Anglo-Italian Cup in the 1990s

The final incarnation of the Anglo-Italian Cup was a short-lived affair; it was a brief revival for a tournament that had struggled and failed over the course of three decades to find a sustainable format. In the 1990s, the competition was once again beset by demons of the past; fixture congestion, violence and public apathy. But it had one last gift to offer.

The competition, contested between second tier clubs from England and Italy, featured a formidable constellation of talent. From rising stars and rough diamonds at the beginning of their careers, through to loyal heroes who had stood by their clubs following relegation. These are the remarkable alumni of the 1990s Anglo-Italian Cup who left behind the rigours of Serie B and midweek trips to Stoke, Oldham and Southend to establish themselves as decorated champions at the pinnacle of world football. 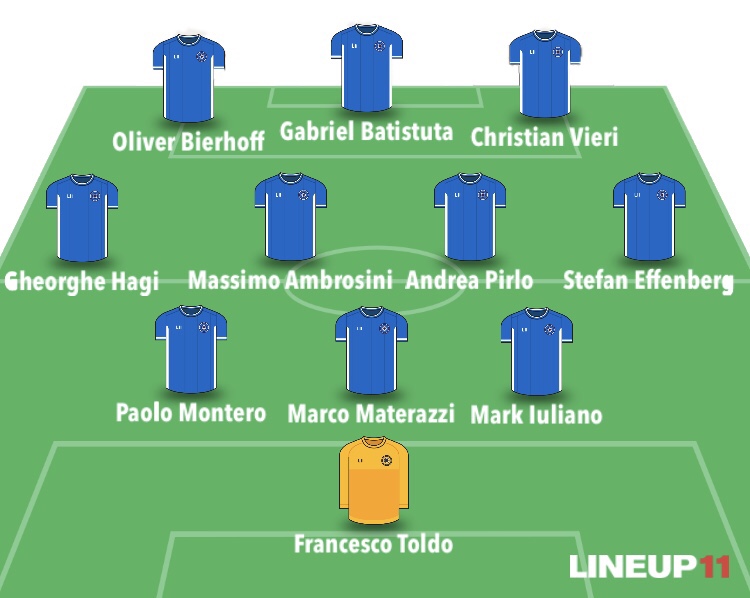 As Fiorentina looked to rebuild following their relegation from Serie A the previous season, they installed a little-known 22-year old as their first choice goalkeeper. Claudio Ranieri’s team started the season in fine form domestically, with Toldo keeping 10 clean sheets in his first 14 league starts. In the middle of that run Toldo also kept a clean sheet in a 0-0 draw with Joe Jordan’s Stoke City at the Victoria Ground.

Toldo went on to win 4 consecutive scudetti with Inter between 2006 and 2009, 5 Coppa Italia and 1 Champions League. He would also win 28 caps for his country, a number that surely would have been greater had it not been for the golden generation of goalkeepers of which he was a member.

After moving to Europe aged 21, tough-tackling Uruguayan defender Montero became a fixture of the Atalanta backline over a four year period in the early 90’s. Following Atalanta’s relegation to Serie B, Montero played in the Anglo-Italian Cup, opening the scoring in a 2-0 victory against Tranmere Rovers at the Stadio Atleti Azzurri d’Italia.

Montero helped Atalanta return to Serie A that same season, earning himself a move to Juventus in 1996. In Turin, he made over 200 appearances and picked up 4 scudetti as Juve entered a decade of domestic dominance. During these years, Montero developed a reputation as a fearsome competitor; underpinned by the record he still holds for receiving the most red cards in Serie A (16).

Materazzi signed for Perugia in 1995, having spent his formative years at amateur and Serie C level. The 22-year old was something of a squad player for I Grifoni as they participated in a group with Oldham, Port Vale, Luton and Birmingham. Materazzi started the home game against Barry Fry’s Birmingham – no doubt receiving a schooling in classic English centre-forward play from Steve Claridge that evening, as Perugia slipped to a 1-0 defeat.

Even as late as 1998 and his unsuccessful move to Everton, few would have predicted the success that the physically-imposing defender would go on to have with Inter and Italy. Materazzi was a classic late-bloomer, winning his first career trophy aged 32, but then going on to win 5 consecutive scudetti, 4 Coppa Italia, the Champions League and the World Cup.

Iuliano was an up and coming 22-year old central defender when he featured for Salernitana in a group against Ipswich, Southend, Stoke and West Brom. Iuliano possessed all of the classic hallmarks of an Italian central defender; tenacious, strong in the tackle and an accomplished man-marker.

Form Salernitana, Iuliano’s career bore a striking resemblance to that of Montero. Both signed for Juventus in 1996 and went on to make over 200 appearances in black and white. And they both left Juventus after nine seasons at the end of 2004/05, having won 4 scudetti and reached 3 Champions League finals. Iuliano also won 19 caps for Italy.

The enigmatic Romanian was arguably in his prime when he lifted the Anglo-Italian Cup with Brescia in 1994. Having joined from Real Madrid, he endured an eventful two years in Lombardy comprising one relegation, one promotion and the prized Anglo-Italian Cup win. Brescia used him sporadically in the competition and, when selected, the player applied himself sparingly too. Hagi scored a 30-yard thunderbolt in front of the supermarket end at Bolton’s Burnden Park, spent 90 minutes on the bench at Ayresome Park and put in a brilliant-yet-languid performance in the Wembley final.

Just months after the final, Hagi lit up the 1994 World Cup as his maverick brilliance steered Romania to the quarter-finals. Hagi was selected in the team of the tournament and earned himself, aged 29, a move to Barcelona. From there he found a home-from-home with Galatasaray, securing 4 Turkish titles and the UEFA Cup during a five year stay.

Brescia spent a large part of the 1990s bouncing between the first and second tier in Italy. At the very end of one of those relegation seasons, a 16-year old Andrea Pirlo became Brescia’s youngest ever player in Serie A. The following season in Serie B, opportunities were hard to come by for the youngster in Lombardy. However, Pirlo did manage an 11 minute cameo in the 2-2 draw with Ipswich at the Stadio Mario Rigamonti.

Pirlo’s career gained momentum over the next five years with Brescia, Inter and Reggina. But it was the decade he spent at the San Siro with Milan where he established himself in the highest strata of Italian football. He successfully transitioned from attacking midfielder to deep-lying playmaker, a move that underpinned the longevity he enjoyed with Juventus towards the end of his career. In total Pirlo won 6 scudetti, 2 Champions Leagues and a World Cup – and was described by Johan Cryuff as a “genius”.

There were a number of similarities between the experiences of Hagi and Effenberg in Italy, albeit the narrative was played out with different clubs. Both players were relegated from Serie A in their first season, and both remained with their respective clubs to seek redemption the following year. And it was then that Effenberg, a regular fixture in midfield for reigning World Champions Germany, was part of the Fiorentina squad that tackled the Anglo-Italian Cup. Effenberg was in the Fiorentina engine-room, pitting his wits against Nigel Gleghorn the evening they ground out a 0-0 draw at Stoke.

Effenberg was a fearsome competitor with an impressive range of passing and eye for goal. However, the midfielder courted controversy at various points during his career. He had several public fallings out with Lothar Matthäus and was banished from the German 1994 World Cup squad after making a lewd gesture to German fans during the tournament. Notwithstanding these misdemeanours, he went on to win 3 Bundesliga titles with Bayern Munich and 35 caps for his country.

A 17-year old Massimo Ambrosini broke into the Cesena midfield in the 1994/95 season, making 25 league appearances. He was an ever-present in what amounted to a disasterous Anglo-Italian Cup campaign for I Bianconeri, recording one draw (v Middlesbrough) and three defeats (v Derby, Stoke and Sheffield United). The highlight for the young holding midfielder was a consolation goal scored in a 6-1 defeat at the Baseball Ground.

After just one season of senior football, the prodigious talent had caught the eye of AC Milan. Across 18 seasons with Milan, Ambrosini forged a reputation as a tenacious box-to-box midfield player, rolling up his sleeves in a hyper-talented rossoneri side. He won 4 scudetti and 2 Champions Leagues, establishing himself as club captain in his final season with the club. The player with a distinctive flash of blonde hair also racked up 35 caps for Italy.

Powerhouse forward Vieri had two separate stints in the competition during the nomadic early part of his career. He scored the decisive goal in a ding-dong battle between Pisa and Bristol City; the Italians raced into a four-goal half time lead only to be pegged back to 4-3 to set up a nervous finale. Two years later Vieri once again scored the winner in a 2-1 victory for Venezia against Wolves.

Vieri is perhaps best remembered for his six year stay with Inter, to whom he moved for a world record fee of £32 million in 1999. In Milan he scored 123 goals in 190 appearances and lifted the Coppa Italia in  2004/05. The player battled a succession of debilitating injuries which curtailed his potential, finishing his career with just one scudetto to his name (Juventus 1996/97) and 49 caps for his country. Bobo was twice named Italian Footballer of the Year (1999 and 2002).

Bierhoff was the most prolific goalscorer across the 1990s incarnation of the Anglo-Italian Cup, scoring 9 goals across three editions of the competition. His crowning glory was perhaps the hat-trick he scored in the 3-1 drubbing of Swindon on route to the 1994/95 final. However, the competition was a bittersweet experience for the Teutonic targetman as his Ascoli team were ultimately defeated by Notts County in the final.

The German went on to spend his prime years in Serie A with Udinese (1995-1998), where he was capocanoniere (top scorer) in 1997/98, and then Milan (1998-2001), with whom he won the scudetto in 1998/99. However, it was on the international stage where Bierhoff – famed for his aerial prowess – would demonstrate his very best. He scored a Golden Goal winner to lift the European Championships with Germany in 1996 and finished runner-up at the 2002 World Cup.

Batistuta secured cult status in Florence when, following Fiorentina’s inexplicable relegation from Serie A, the two-time Copa America winner decided to stay on and help the club return to the top flight. His loyalty also afforded him with the rare opportunity to compete in the Anglo-Italian Cup. The pinnacle of Batistuta’s involvement in the tournament was undoubtedly his brace at home to Southend United in front of 2,000 fans at the Stadio Artemio Franchi.

The very next season he finished as capocanoniere in Serie A and lifted the Coppa Italia with La Viola. He went on to become Fiorentina’s greatest ever goalscorer. He developed a reputation as perhaps the most complete forward of his generation; clinical, strong in the air and capable of the spectacular. His begrudging decision to leave for Roma in 2000/01 was vindicated with a scudetto in his first season.

Ancelotti cut his managerial teeth in Serie B with Reggiana in 1995/96. After a slow start which initially saw his job under threat, his side gathered momentum, timing their charge to perfection by winning promotion on the final day of the season. One of the sacrifices of this success was the Anglo-Italian Cup; Reggiana lost at both Ipswich and West Brom, picking up a solitary point at home to Southend. Their final match against Lou Macari’s Stoke was snowed off and never re-arranged as both teams were mathematically out of the tournament by that point.

Ancelotti had also experienced the Anglo-Italian Cup as a young plyer with Parma in 1977, being held to a 0-0 draw with Yeovil Town. As a manager, Ancelotti later made up for any lingering Anglo-Italian Cup disappointment by winning titles in Italy, England and Germany and winning the Champions League three times.

And there you have it: the glorious alumni of the Anglo-Italian Cup. It’s certainly a formidable team on paper, and that’s before you consider there’s no room for Thomas Helveg (Udinese), Robert Jarni (Bari), Jose Chamot (Foggia), Igor Protti (Lecce), Dario Hubner (Cesena) or Vincenzo Montella (Genoa)…

Also in the Anglo-Italian Cup series:

Part I: The Brutality and Romance of the Anglo-Italian Cup 1970-73

Part II: The Farcical Mismatches of the Anglo-Italian Cup: the Semi-Professional Years 1976-86

Part III: The Tempestuous Curtain Call of a Tournament Destined to Fail: the Anglo-Italian Cup 1992-96