On 10th January 49 B.C. Julius Caesar stood on the banks of the Rubicon river, his loyal army by his side as he contemplated its crossing. Legend has it that as he pondered his decision a beautiful young boy appeared, playing the flute. Suddenly, this mysterious boy grabbed hold of one of the soldiers’ horns, sounded the battle cry and crossed the river.

Taking this as a sign from the Gods, Caesar roared out this famous Latin phrase alea iacta est (the die is cast), duly followed the boy and marched onwards to Rome in his conquest for further recognition and political control. There was no turning back, his decision had been made.

Crossing the Rubicon is still used today as a metaphor for deliberately crossing a point of no return. The Rubicon river was the border between Rome and its external territories and entering with military forces was prohibited. Caesar had become an enemy of Rome and his political ambition ultimately instigated the demise of the Roman Republic and the start of an Empire.

Whilst it isn’t precisely known where Caesar crossed, the area between Savignano sul Rubicone and Rimini is considered to be the most likely place. The charming little town of Savignano didn’t exist at the time, but this decisive moment in Roman history has put it on the map. It is only a few kilometres down the road from San Mauro Pascoli, where Mantova had played their opening away game of the season and their third visit to deepest Romagna this season.

Wedged between Cesena and Rimini along the historical Roman route SS9 Via Emilia, the town proudly displays the Roman bridge built in the 1st century A.D. under the first Emperor Augustus, adopted son of Caesar. Despite being destroyed by retreating German troops during the Second World War the bridge was meticulously put back together again several years later.

Walking back and forth over the bridge, I contemplated this article and reflected on my decision to take up the responsibility of starting this blog. It has been challenging and tiring writing fortnightly articles for the empty void of the internet. Teaching full time, playing in my band and the daily grind of managing time, people and lifestyle will continue to be a balancing act. But I have now literally crossed the Rubicon, so going back on my word and commitment is not an option.

As I eagerly headed off to the Stadio Comunale Capanni on the outskirts of town, the excitement and adrenaline of the battle to come kicked in. On entering the ground, the raised bank that leads away supporters to the main Tribuna gave a fantastic view of the pitch. The newly laid athletics track further enhanced the space and size of the field of play. There was a decent turnout to see the league leaders, all congregated under the covered main stand. Whilst not quite of gladiatorial stature, the stadium setting had a pleasing geometrical form and size, rather than the closed tight stadiums previously visited this year. 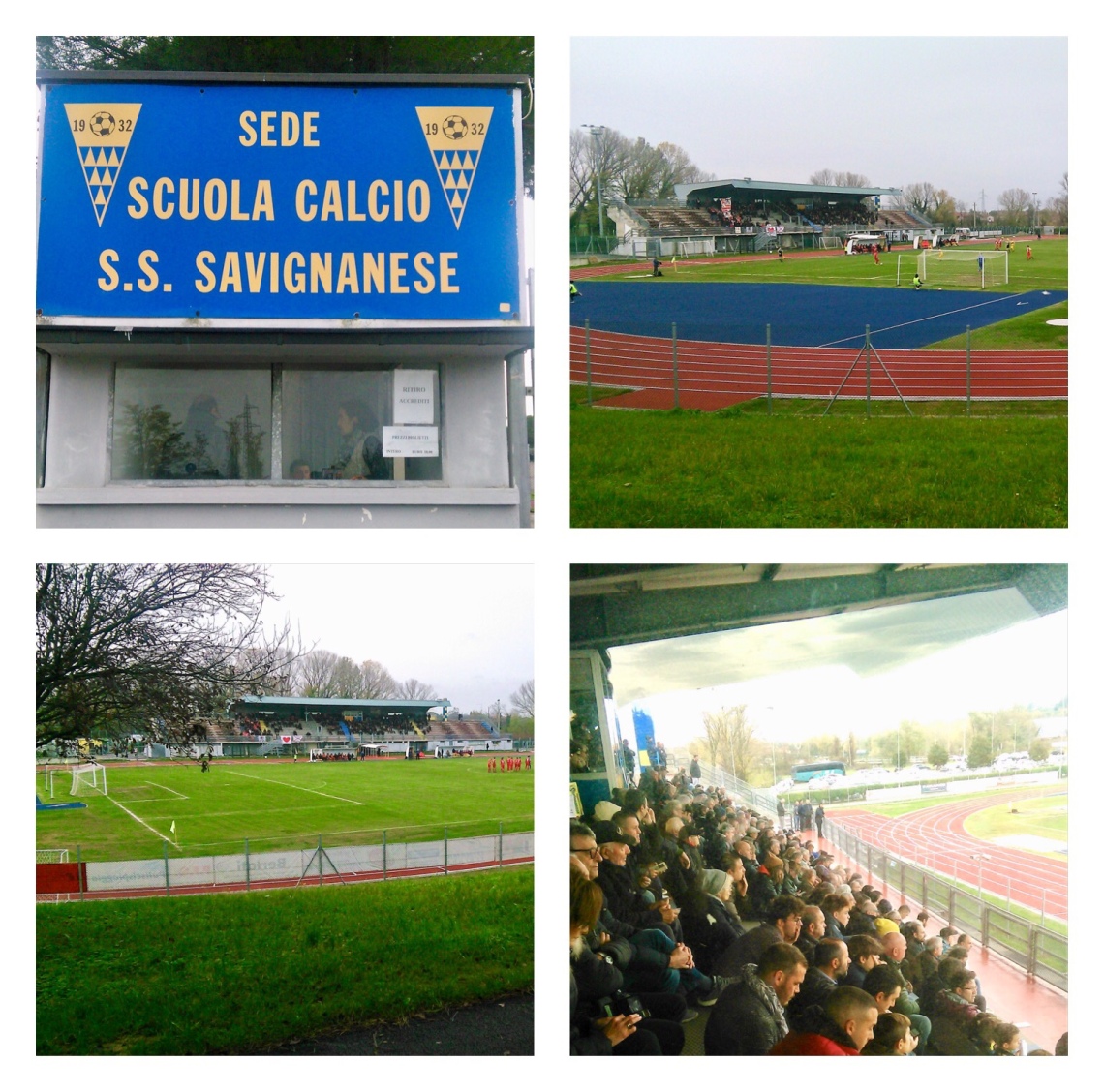 Mantova came into the game on the back of three draws in four matches, including a tantalising 3-3 home draw last week against 2nd placed Fiorenzuola, which maintained their 5 point lead. The experienced central midfielder Giorgi was back alongside playmaker Mazzotti. And changes to the backline and goalkeeper signalled that Mister Brando had had enough after a poor defensive start to season.

Winless at home so far and struggling at the bottom end of the table, Savignanese looked to be up against it. Luigi Scotto and Christian Altiner fired Mantova into a two goal lead after 17 minutes, both scoring with deadly finishes from inside the box after crosses from the right. The loyal army of supporters, around 150 of them, cheered triumphantly with a sense of inevitability. The victory party had already begun.

Only two years ago Savignanese were promoted to Serie D for the first time in their history, having had the most appearances of any club in 5th tier Eccellenza since its introduction in the 1990’s. For most of the first period, they were camped in their own half and when they did venture forward they looked hapless and low in confidence. The torrential rain that had poured on Italy in the last few weeks, and the long grass, didn’t help their cause or the game.

Further goals didn’t arise though and as the inevitable substitutions came midway through the second half Mantova retreated, lost their fluidity and gave the home side some hope. The young, Greek debutant goalkeeper Vasilios Athanasiou for Mantova looked assured and handled the ball well all day taking crosses and the sting out of the hosts’ attacking play. The home side did get a goal back with 5 minutes remaining, but couldn’t quite muster enough quality and pressure to unsettle the biancorossi. And to end a miserable day for the defeated gialloblu, their goalscorer and striker Manuzzi was sent off for a second bookable offence.

Ultimately, this was men against boys. Rome against villages. Serie C against Eccellenza! The customary winning huddle and celebrations in front of the travelling support brought the curtain down on yet another enjoyable away day. This was a comfortable win for Mantova in their quest for dominance. The 5 point gap remains after Fiorenzuola won to keep the pressure on. With only four games left in the first half of the season Mantova will be looking to take a maximum points. That would see them finishing with 43 points from 17 games and surely one step closer to their goal.

As Caesar famously declared after another victory in Turkey in 47 B.C. Veni, Vedi, Vici. I came, I saw, I conquered. This weekend, it is Mantova who can claim that WE CAME, WE SAW, WE CONQUERED.

Travel Info: Direct trains from Modena/Bologna direction Rimini, stop at Savignano sul Rubicone or vice versa. The station a good 30 minute walk to the stadium, which is located on the outskirts of the town.

If you enjoyed this, catch up on Rick’s other Mantova articles here.