Torino are historically one of the most successful clubs in Italy. During the 1940s their Grande Torino team were all conquering, winning five consecutive league titles either side of the war. This run only came to an halt when the entire team tragically perished in a plane crash. Successes have been fewer and further between since then and the club have been forced to live in the shadow of their city neighbours for much of the intervening period.

The Granata have been a consistent upper mid-table side since returning to Serie A in 2012/13. They finished 7th last season, missing out on European qualification by just 3 points. Their finishing position was perhaps slightly above expectations, given their annual budget.

Torino only learned they would be participating in this season’s Europa League competition at the very end of June, after AC Milan were banned as a consequence of Financial Fair Play breaches. Toro have had to adjust their pre-season schedule accordingly.

How do they play?

The backline is the foundation of the team. Goalkeeper Salvatore Sirigu was a revelation on his return to Italy from PSG last summer. The central defensive pairing of Nicolas N’koulou and Armando Izzo were key to their success too, with Izzo breaking into the Italy team at the end of last season. Torino conceded less than a goal per game on average last season.

The wing-backs (typically some combination of Christian Ansaldi, Ola Aina and Lorenzo Di Silvestri) are a key attacking outlet for Torino, providing the ammunition for Andrea Bellotti up front. Bellotti tends to be paired with a second striker, such as Iago Falque.

The rest of the Toro midfield is industrious and hard to break down, without being spectacular. Tomas Rincon is usually the holding midfielder, whilst Daniele Baselli gets up and down to support attacks.

The main caveat to all of this is that in the Europa League qualifiers so far, Mazzarri has opted for a 3-4-3. However, this more offensive line up may well be a reflection of the lower calibre of opposition they have faced so far.

Who should you watch out for?

The key man is undoubtedly 25 year-old forward and captain Andrea Bellotti. Three seasons ago he hit 28 goals and was linked with a €100m move to Manchester United. However, a succession of injuries in 17/18 contributed to him losing his way, and his stock falling considerably.

Last season Bellotti recaptured some of his form, scoring 17 goals. He’s a natural goalscorer; an instinctive poacher inside the box with both head and boot, but also capable of the spectacular from further out. Watch out for his “rooster” celebration if he scores.

At the other end of the field, ‘keeper Salvatore Sirigu was in the form of his life last season (aged 32) and proved himself to be one of the most consistent ‘keepers in Serie A. If Torino do progress, it is likely that Sirigu will be a key man.

How far do Torino expect to go in Europe?

Drawing Wolves will have been a major setback to Torino, as they would have targeted at least the knock-out stages of the Europa League. If they do progress, the challenge for them in the coming season will be to sustain form on both domestic and European fronts.

Torino have been strangely quiet on the transfer front this summer, particularly given the expectation of a busier schedule this season. Their main pieces of business have been to make permanent a number of their loan deals from last season, such as Ola Aina from Chelsea and Christian Ansaldi from Inter. On paper their squad lacks depth, and they’ll be in particular trouble if they lose Bellotti for any period.

Are there any injury worries ahead of the Wolves game?

Nothing of any note – the line ups for the qualifiers to date have featured all of their key players.

What is the atmosphere going to be like in Turin?

Torino have a particularly passionate support and their fans are relishing the prospect of competing in Europe again, so expect an intense atmosphere. The Stadio Olimpico itself has an intimate feel despite the stands being set back some way from the pitch. You can read more here.

How are Torino expected to line up? 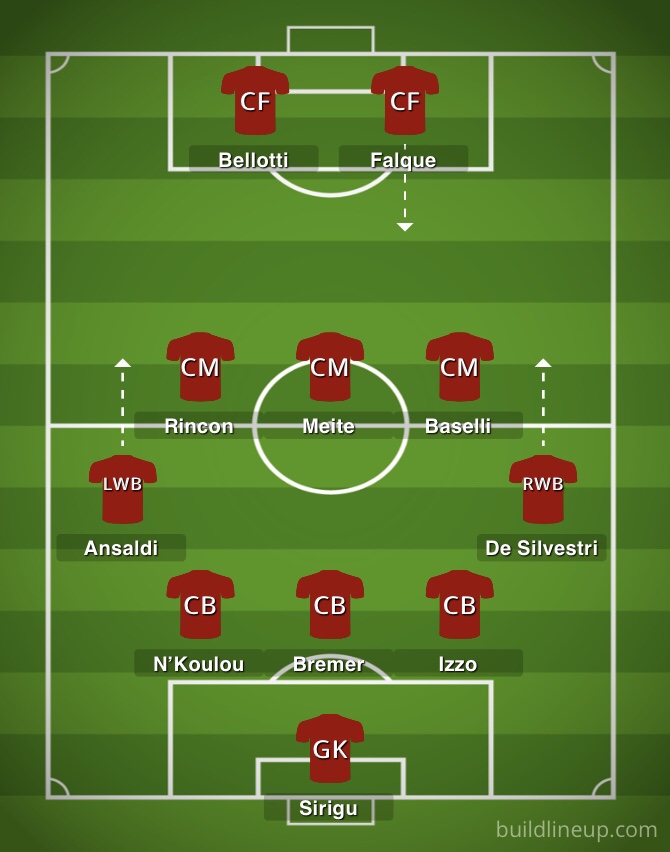 How will the tie play out?

Overall, Wolves must be favourites to progress over the two legs. The centre of the midfield will be a key battle where Wolves’ quality is likely to prevail. Last season, Torino were much stronger at home than away and will be roared on at the Olimpico on Thursday. With Torino’s solid backline there’s unlikely to be more than a single goal in it on Thursday, with all to play for at Molineux in the second leg.

Thanks for reading – why not explore my other articles on Italian football at CalcioEngland.Wordpress.Com